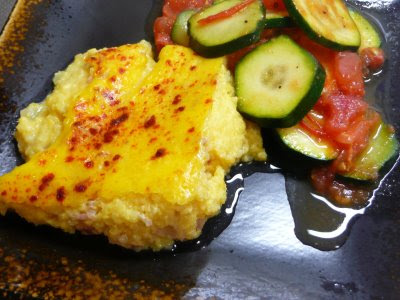 You can't really say Florida is part of the Deep South, but since all four of my grandparents were born and raised in Georgia, and both my parents were born and spent part of their childhoods there as well, I guess I'm partly Southern in my taste in food. I wasn't raised on fried chicken or anything like that, but we did have grits mixed with scrambled eggs for breakfast sometimes, and New Year's Day never passed without black-eyed peas, cornbread, and greens.

When I found this grits and cheese casserole recipe several years ago (in More with Less), I had to try it. It's comfort food at its best (for me, anyway). With my own addition of sauteed onions and bacon, it ups the tasty factor even more.

I served it tonight with zucchini slices that I sauteed with the leftover bacon fat, a bit of olive oil, some minced garlic, sliced ripe tomatoes, Jane's Krazy Mixed-Up Salt, black pepper, and a splash or two of lemon juice.

For the kiddiewinks, I just used my immersion blender to mix the casserole with the veggies into a thick porridge that I called "cheese soup". It went down like a treat. 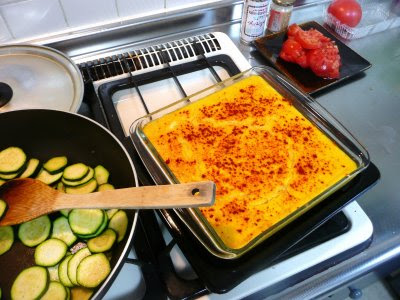 For the casserole, you'll need:

4 c. water
1 c. grits (I had exactly that amount that K and S sent me a while back - thanks again, guys!) - the recipe actually called for hominy grits but I didn't have any of those
1/3 c. margarine
2 c. shredded cheese
1 t. Worcester sauce
6 drops hot pepper sauce
1 t. salt
3 eggs, beaten
I also added some black pepper, and 1/2 an onion sauteed with several chopped pieces of bacon

Bring water to a boil, add the grits and stir for 5 minutes, cooking on low, not forgetting to stir so that everything doesn't end up in one huge yellow clumpy mess. Add the rest of the ingredients and then pour it into a greased casserole dish. Sprinkle the top with paprika, and then bake at 275 F/135 C for one hour.

Hope y'all enjoy it, too!
Posted by Abigail (aka Mamatouille) at 8:21 PM

o yum! i love grits (and hominy for that matter). my kids will love this...we'll make it for dinner tonight since i have all of the ingredients on hand. thanks, abigail.

and, in answer to your question about the labor, check your inbox ; )

now why do they like grits but not cornbread?? glad you were able to use the grits :)

Sadly no one in my world likes grits. :(

Cate - Let me know how you guys like it!

K and S - I think my husband feels cornbread is too "stodgy" and he can't eat much of it at any one time, and because cornbread falls apart and has little bits, unlike regular bread, Matthew's just not used to it yet. We'll get him there, though. ;)

Justquirky - I bet you could divide the recipe into 1/3 of the original amount and just make some for yourself - you'd probably have enough for one meal for yourself and then a bit of leftovers you could take to work the next day. :)

I make a casserole similar to this - their so delicious this way. And definitely great comfort food.

About the cilantro for the noodles - it is just used for a garnish and really didn't add anything to the dish. The PB flavor is so prevalent. You could leave it out or maybe a bit of tarragon would be good.