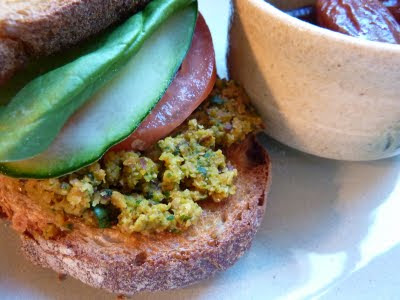 I guess you could call this a poor man's pâté (who wants to splurge on geese livers?), but it's definitely not low on flavors--earthy from roasted almonds, bright with cilantro and fresh lemon juice, and the steamed carrots add a lovely sweet dimension. Not to mention all the spices: cinnamon, turmeric, cumin, and coriander. Yum on a bun. (Or bakery bread, as the case may be.)

And we added dates to go with.

The recipe comes from a free Delicious Living magazine I got at my local grocery store and I only tweaked it slightly.

This is easy but takes some prep stages--just do each step as you have time. You must cool the toasted almonds and steamed carrots, so either do this in advance or if you are pressed for time as I was, throw them in the freezer a few minutes to chill down to room temp.

Preheat your oven to 350 F/180 C and toast the almonds on a baking sheet for about 10 minutes or so, until crunchy. Cool them down and in the meantime, steam your carrots until tender and then cool them as well.

Throw all the ingredients into your trusty food processor and mix until blended (it will still have some texture to it).

The magazine suggested serving the pâté on a bun with cheese, roasted red peppers, and cucumber, which would've been delish, but I had The Essential Baking Company sliced bread (our fave) and toasted it, spread with Earth Balance (like butter), and then topped with the pate, sliced tomatoes, sliced cukes, and spinach.

The only thing I'd do differently next time is to at least double or triple the amounts. I want MORE.

Pâté yourself on the back for this one, folks--it's that good.

(Pssssst. Even the kiddiewinks tried it and liked it!) 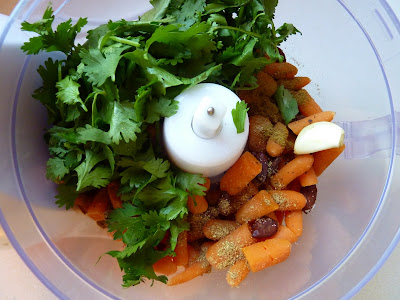 Posted by Abigail (aka Mamatouille) at 10:42 AM No comments: