oh bring me some figgy ricotta!

OK, so these are actually grilled figs with spiced ricotta, a cinnamon-infused syrup, and topped off with sliced almonds... 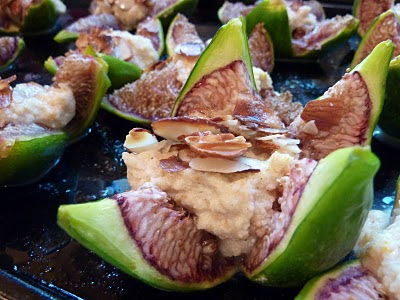 Have I got your attention yet?

It all started with a bowlful of Californian green figs (grown right here in Seattle) from my next-door neighbor's tree and left on our front porch. You gotta love this street--another neighbor left us a gorgeous bouquet of homegrown dahlias and other flowery goodies recently and if you forgot to buy sesame seeds on your last grocery run, someone nearby will have some for you to borrow a bit. 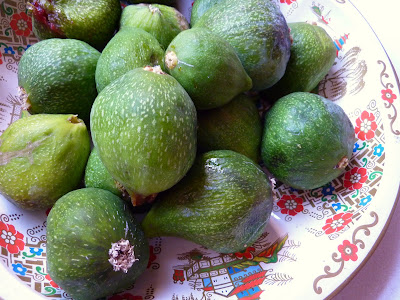 Along with 80 ml (1/3 c.) water, add the honey and cinnamon stick to a small pan and bring to a boil, then reduce the heat and simmer gently for 6 minutes, or until it's all thickened up and reduced to about half of what it originally was. Turn off the heat, take out the cinnamon stick, and stir in the almonds.

Preheat your grill (broiler). Grease a baking pan and slice the figs into quarters, being careful not to go all the way through and keeping them attached at the base. Put 'em in your baking pan, side by side and ready for some grilling action, baby.

In a smallish bowl, stir up the ricotta with the vanilla, sifted sugar, ground cinnamon, orange zest, lime juice, and pinch of nutmeg. Divvy it up amongst the cute little figgy-wiggies, spooning some syrup with almonds over each one. Broil/grill (watch it carefully!!!) until the almonds are slightly browned (note: I used my camera carefully because a few of my burnt almonds told me they were a bit embarrassed). Cool for a few minutes, spooning over any juices and almonds that are in the bottom of the pan.

Consume and then roll your eyes in taste-bud ecstasy. There's just something special about figs and cheese--a match made in heaven.
Posted by Abigail (aka Mamatouille) at 12:43 PM 1 comment: 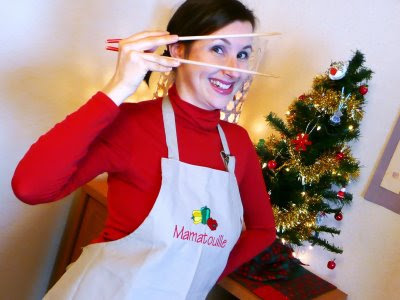 Take a gander at a few of my faves:

Seems like a lot of cranberry and lemon floating around these here pages.

Anyway, thanks to all of you still reading Mamatouille! I haven't kept up with Foodbuzz and I hardly comment on anyone else's blogs anymore, but if you're stickin' with me, I wanna blow you a big kiss from Seattle! Love ya!
Posted by Abigail (aka Mamatouille) at 1:59 PM 3 comments:

I know it's probably not blog-worthy that I (ahem) use a pancake mix, but would it make you feel any better if I told you it's Bob's Red Mill 10 Grain Pancake and Waffle Mix? Only shipped in from one state away? I also figure it's cheaper for me to purchase the mix than it is to actually go out and buy ten different grains to make it myself.

Plus, when you've got at least one little preschoolertouille who wakes up before 6:00 (yes, that's a.m.) every day, then you want something to fix in the morning that doesn't require too much brainwork.

BUT because I'm Mamatouille, of course I mix these babies with a twist. Instead of water, I use equal amounts of whole milk, applesauce, and pureed organic pumpkin. And I also throw in some freshly grated Oregonian cheese. (See, I do some work in the morning! I grate! I probably should have my cuppa before operating any sort of sharp machinery such as a box grater, but what the hey, I live dangerously.)

These are great slathered with honey.

And you gotta love your honeys a lot to be flipping 'cakes at 6.
Posted by Abigail (aka Mamatouille) at 12:55 PM 2 comments:

After going to an outdoor kids' concert to see Recess Monkey in Kirkland, Washington, the other day, we stopped by Cafe Happy (vegetarian Taiwanese style) on our way back to the car. Their red-bean smoothie was absolutely delish and I decided I had to try to make it for myself! 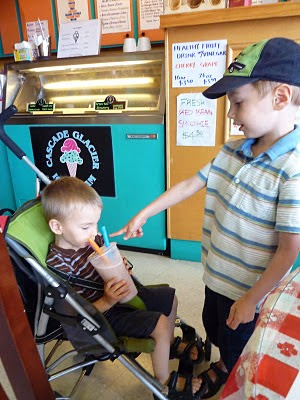 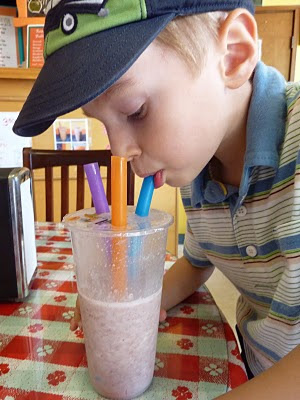 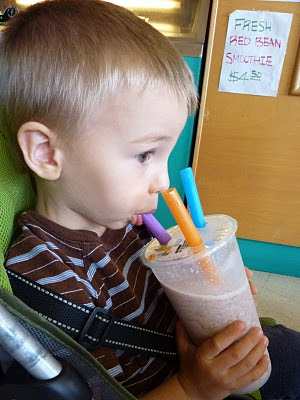 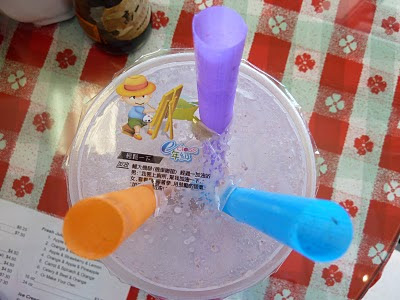 So I got myself down to an Asian market a few days later and bought a can of sweet red bean paste from Japan. Maybe you've heard of azuki beans? These were the mushed and smushed variety called an or anko. 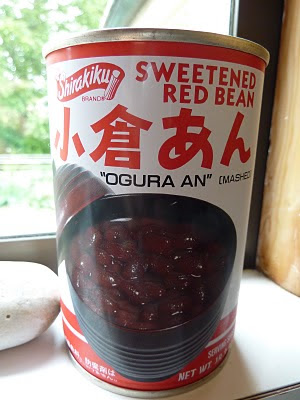 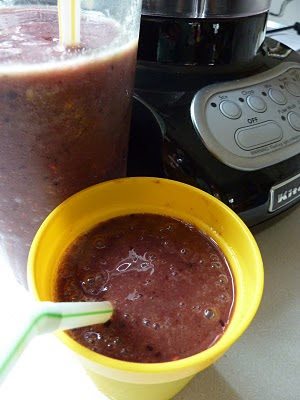 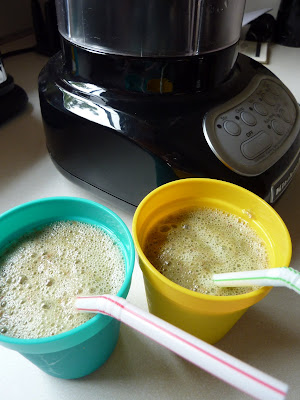 Posted by Abigail (aka Mamatouille) at 5:39 AM 2 comments: 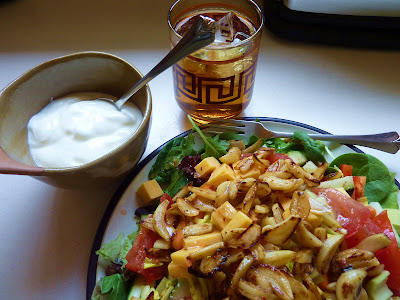 Sometimes our bodies get out of kilter and yeast decides to rear its ugliness and invade our lives. 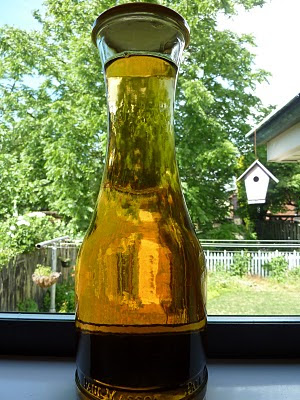 Years ago my grandma gave me a Reader's Digest booklet called Favorite Remedies from Your Kitchen and it has come in handy on so many occasions. Here's their cinnamon yeast-fighting tea recipe: Add 8 to 10 broken cinnamon sticks (I buy them in bulk from the bin section of the store--it's much cheaper that way) to 4 cups boiling water and let it all simmer for 5 minutes, then take the pot off the burner. It goes on to say that you should let it steep for 45 minutes, but I do it overnight and then refrigerate and serve it with ice.

I think yeast problems are more rampant than we like to think (apparently even men can get them!) and if you'd like more information from a source that's a great help to me, check out The Yeast Infection Homepage, which has super-duper ideas for fighting back!

I hope I haven't grossed anybody out, I just really want to pass on creative and helpful ideas to any of you who might suffer in this way. Here's to your great health! Cheers! (Just make sure you're clanking cranberry-juice glasses--no beer right now, please!)
Posted by Abigail (aka Mamatouille) at 5:25 AM 1 comment:

So this is what a green-smoothie addict has in her fridge (list of fresh produce taken at a random moment after a trip to farmers market and grocery store): broccoli, red chard, spinach, pineapple, mango, rhubarb, carrots, strawberries, ginger, cabbage, canteloupe, grapes, oranges, apples, bananas, avocados, zucchini, cukes, cilantro, celery, and watermelon. At one time. No joke. 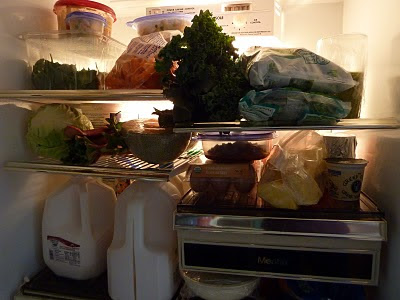 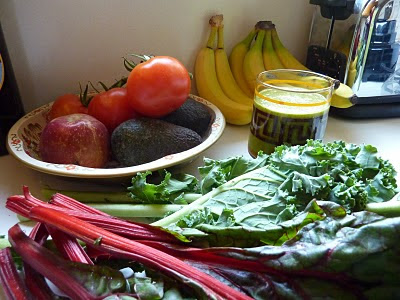 I'm thinking of having my middle name legally changed to Green. 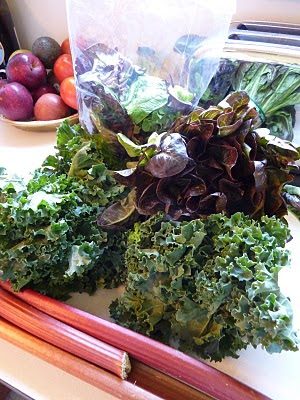 Posted by Abigail (aka Mamatouille) at 1:33 PM No comments: