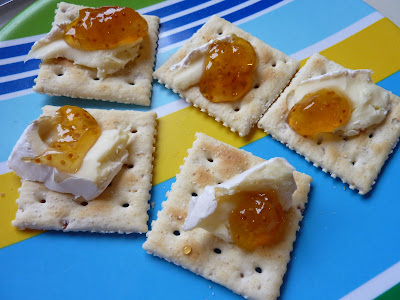 We've been trying to avoid dairy as much as possible but for appetizers for our Christmas dinner, I served brie, fig jam, and Carr's multigrain crackers. I first had the brie and fig jam combo in Florida when my aunt served it to us, and I've been dreaming about it ever since.

The beans wanted some for their snacktime yesterday, and though we were out of the lovely Carr's crackers, some multigrain Saltines stood in nicely.

Nobody complained.
Posted by Abigail (aka Mamatouille) at 3:44 PM No comments: 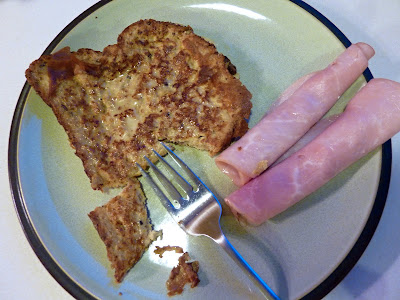 For a different breakfast, this'll do you good! Beat eggs, almond milk, Nature's Seasons seasoned salt, and Worcestershire sauce together, dip your bread in, and fry on both sides in Earth Balance (like margarine). Excellent with chemical-free, flavor-laden Black Forest ham. (Hubby has his like a sandwich with the French toast, ham, and ketchup.)
Posted by Abigail (aka Mamatouille) at 3:41 PM No comments: 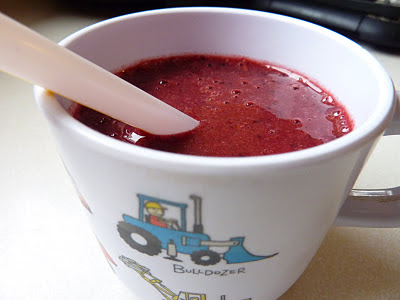 Still snowing and haven't been to the store yet so no greens in the house. This yummy smoothie had carrot juice, frozen mixed berries, two navel oranges, two bananas, and flaxseed meal. Mmmmmm.
Posted by Abigail (aka Mamatouille) at 3:06 PM No comments: 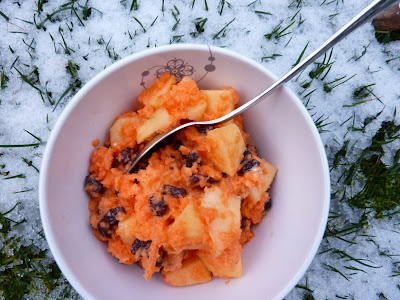 I did a version of this here on Mamatouille back in the summer of '08, but hey, it's danged good in winter, too.

This salad is what you make when you don't have any greens in the house for a green smoothie but you want something fresh and as raw as possible--I usually add pineapple but had none, and this time threw in some freshly grated ginger, which was absolutely superb and was a perfect complement to the rest of the ingredients.

Mix all together and enjoy!

Speaking of which, I'm about to go have myself another little snacky bowl of this stuff while I read more of The Cookbook Collector and wait for the Seattle-snowstorm-of-a-generation.

Posted by Abigail (aka Mamatouille) at 2:14 PM No comments: 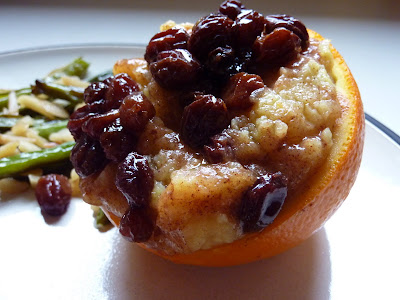 Because our kiddiewinks were not well for Christmas and New Year's, we had to postpone our Christmas dinner until last night! I didn't have a chance to take loads of photos but I'll let you in on our menu: a 7-pound nitrate- and nitrite-free boneless ham (from our local butcher, Better Meat) that I baked with a clove, brown sugar, maple syrup, and Dijon mustard sauce, roasted green beans with slivered almonds, fresh lemon juice, olive oil, and kosher salt, rolls, homemade cranberry sauce (to which I added plum wine and freshly grated ginger), and my friend Angela inspired me to try baking mashed sweet potatoes in oranges (and I had just read Appetite for Life, the biography of Julia Child, and noted that Julia made something very similar in the 50s). I used Angela's mother-in-law's version of the recipe as a jumping-off point and changed it just a wee bit: I used maple syrup instead of white sugar, I used organic white sweet potatoes instead of orange ones, for the topping I substituted raisins for the mini marshmallows in the butter-brown sugar sauce, and plus I added ginger, cinnamon, and nutmeg. They were so yummy!

Remember the British Christmas puddings my mother-in-law and I made 1.5 years ago? Well, we still had one left, well preserved in brandy. I steamed it all day and served it lit up with rum (Matthew said it looked like the aurora borealis!), and had plenty of rum-sugar-butter to spread on top (my mother-in-law's recipe: Blend 4 oz. sugar, 4 oz. butter, and 2-3 T. brandy, or in this case, rum).

What did I do with all the sweet, gorgeous navel orange insides after I scooped them out to make room for sweet potatoes? Made a green smoothie this morning, of course! I added a bunch of organic kale, two organic bananas, and the oranges were organic as well. Blend and really enjoy--this was one of the simplest but best smoothies I've had (it was five oranges so it added quite a bit of fresh flavor + vitamin C). Very more-ish! 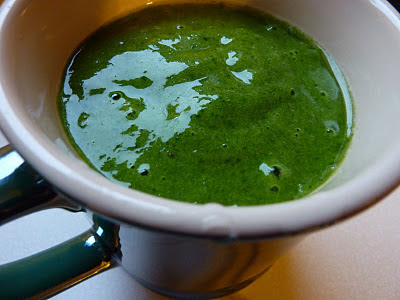 And another green smoothie I made the other day: kale, spinach, cilantro, clover sprouts, flaxseed meal, wheat germ, apples, and almond milk. 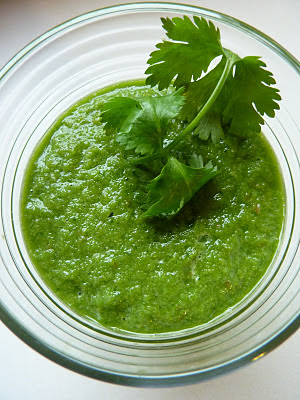 Posted by Abigail (aka Mamatouille) at 1:20 PM No comments: 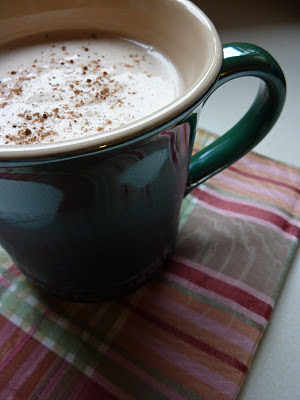 Speaking of health and blessings, this smoothie is full of both (recipe from Real Simple and adapted by little ol' moi--I doubled it, too).

Soak the cashews in 1 cup of water overnight in the fridge, then chuck the softened cashews and liquid into a blender. Add the rest of the ingredients, blitz till smooth, pour into a new Christmas-present mug, sprinkle on some extra nutmeg, and drink to your heart's content.

I actually thought it was a bit sweet and next time don't think I'll add the maple syrup at all--bananas add plenty of their own sugar. Cashews tend to be one of the sweeter nuts, anyway.

Definitely going on my make-again smoothie list--so yummy, creamy, and with the spices I added, holiday-full (but don't get me wrong, I could drink this any time of year).

Posted by Abigail (aka Mamatouille) at 6:28 AM 3 comments: