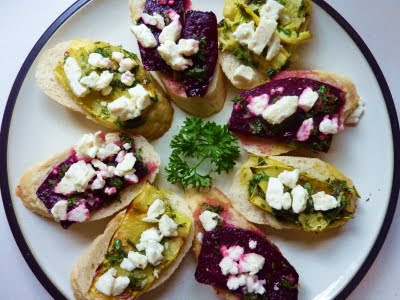 Inspired by Kahakai Kitchen's "eggplant and mint bruschette" (and she used a Jamie Oliver recipe), I knew I had the eggplant, mint (from my garden), and seasonings, and already had parsley on my list. The kiddiewink-beans and I were headed to the grocery store anyway, so I just picked up a baguette and feta cheese while there. (Feta wasn't in the recipe but I wanted this to be a main dish.)

So when I got home I realized my eggplant had seen better days, but my yellow crookneck squash and beets were ready and willing to sacrifice themselves up for greatness.

I don't have a grill but just roasted the veggies with olive oil, then dipped them in the marinade of olive oil, white wine vinegar, salt, pepper, parsley, mint, and garlic. I used a one-to-one ratio of oil to vinegar and we really enjoyed the spikiness of it. After a final quick toasting in the oven, everything was ready to be ooohed and ahhhed over.

The parsley and mint were superb and the feta added a nice creamy saltiness. With some roasted green beans (from a friend's garden), this was a filling and terribly tasty supper.

Too bad I forgot about the bottle of Pinot grigio in the fridge--it would've been perfect with this.
Posted by Abigail (aka Mamatouille) at 2:03 PM 1 comment: 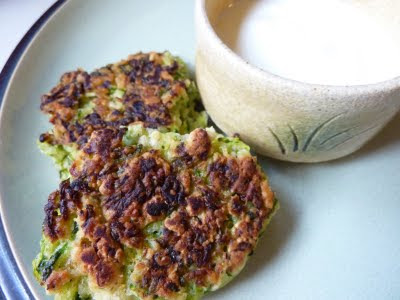 'Tis the season for zucchini, and even though my own zucchini plants are not happy this year, I've had a hankering for them and so my grocery store gets my zucchini business. Smitten Kitchen's zucchini fritters (with baking powder!) are great, as is her lemony garlicky sour cream (I used yogurt) topping.

And yes, I pulled the cast iron pans out of our rental basement (we're allowed to use any of the stuff that was here, which is nice) and scrubbed them with hot water and salt (don't use soap!) for this recipe, and yes, the cast iron made a lovely crust on these fritters. I'm keeping them in my kitchen now...all three sizes. I'm dreaming of cornbread in cast iron...
Posted by Abigail (aka Mamatouille) at 1:49 PM No comments: 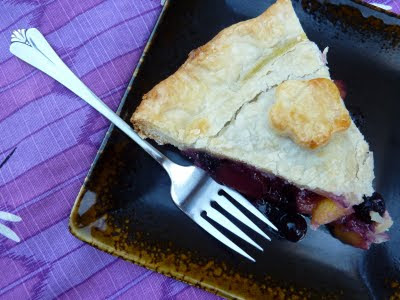 I'd been hankering to make a two-crust pie for ages and after a very busy (but fun) Friday morning last week, decided to hit up Costco for some organic Washington peaches and (Canadian) blueberries. Friday afternoon was devoted to the pie (check out my able helpers below). 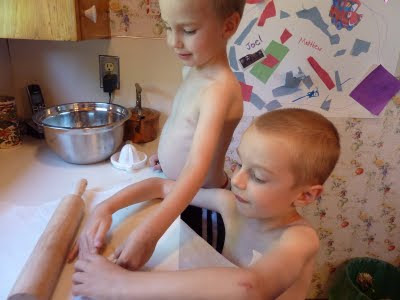 It was my first time ever to do a double crust and I know next time I'll be faster and more confident as well. Anyway, it was a super-fun experience.

If you've never worked much with pastry, check out Pam's pie tutorial over on The Pioneer Woman's stomping grounds. I loved her very practical method of using two sheets of parchment paper and rolling the crust between them. 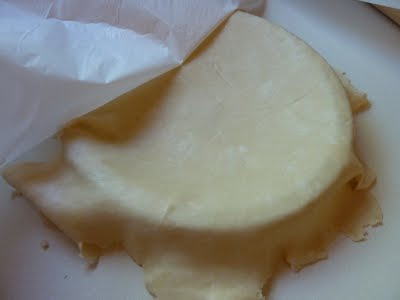 I used Pam's recipe and went with all butter and only 1 teaspoon of sugar in the crust.

(Her suggestion to mix an egg with some water and brush on top did make a nice shiny glaze.) 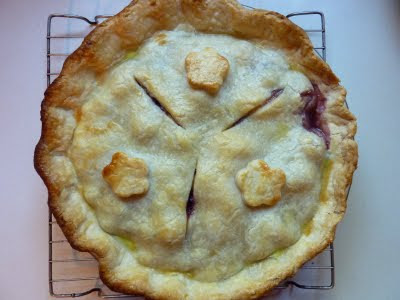 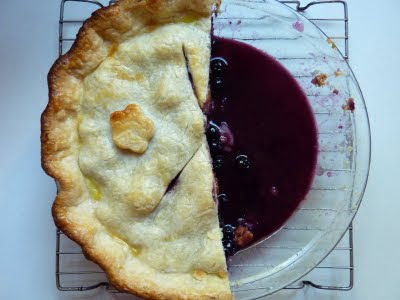 For the filling, I just went with my intuition and mixed 3-4 peaches (can't be sure how much went into the pie because of those helpers I had!), a couple of cups of blueberries, 1/3 c. brown sugar, 2 tablespoons cornstarch, and powdered cinnamon and ginger. (I heart ginger and it gave it such a nice perky extra kick.)

After I added the filling, I also went with Pam's idea to squeeze half a lemon over the fruit and then dot with butter. Lovely. 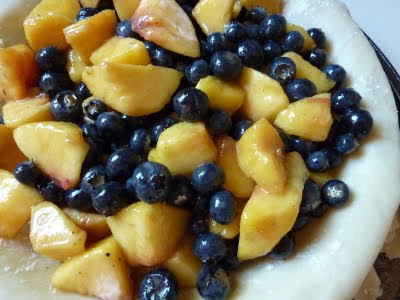 Pam's tutorial does not need to be repeated here, but for posterity I will share my three biggest mistakes:

1. I let the butter warm up too much (again, I had small helpers who are very tactile). One website I used as a resource says that if you are using a food processor, you can even freeze the butter. (I also ran with their idea of mixing equal parts flour and sugar to sprinkle on the bottom crust before adding filling so it creates a non-soggy barrier, and I think that did work well.)

2. The crust got rolled too thin and the top crust tore in one spot as I placed it over the filling. As a result a bit of juices cooked through. No biggy but it wasn't exactly perfecto.

3. Pam suggested turning down the heat after the first part of baking, which I completely forgot to do. So even though I covered the pie with foil after that first segment of baking, the outside edge of the top crust browned too much for my liking.

And in spite of those foibles, the pie was deeeeeee-licious! Can't wait to try my next one. We'll be apple picking in October so I wonder what the next filling will be...
Posted by Abigail (aka Mamatouille) at 10:03 AM 1 comment: 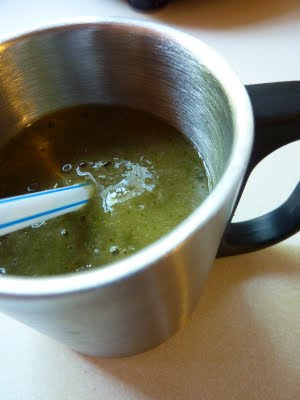 So simple and so yummy. Just blend oh-so-sweet California figs that were a gift from your neighbor's fruitful tree, almond milk, orange juice, bananas, and a head of organic romaine lettuce. 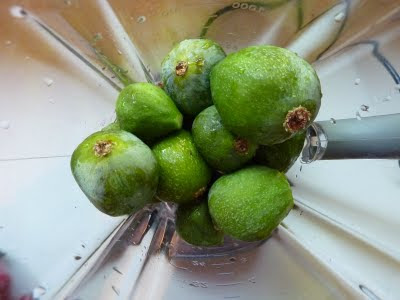 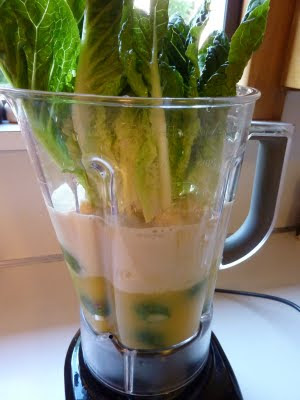 Posted by Abigail (aka Mamatouille) at 1:47 PM No comments: 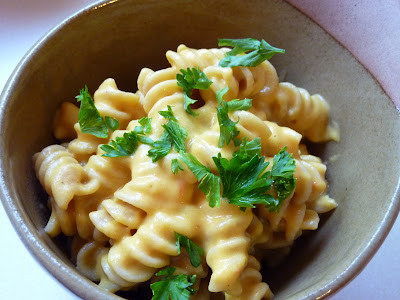 Veg4Health's "cheese" sauce has us all over the moon--one of our kiddiewinks ate two helpings right off the bat and the rest of us ate sizable amounts as well and completely fell in love with this stuff. There's not an iota of dairy in it but what it does have is mega flavor, folks: cashews, garlic, potato, carrot, red sweet pepper, onion, lemon juice, dijon mustard. Nummers.

She said it took her 9 years to perfect this recipe and the yum factor makes it all worth the while and wait. I paired it with whole-grain rotini and some parsley--this is the new black. (What? Anyway, whatever it is, it's going to be rotating frequently on our menu. You betcha.)

Make sure you double the ingredients, to start with. You want as much of this as possible.

Then cook the potato, carrot, onion, and sweet pepper in water till tender. Place the remaining ingredients plus 1/2 C of the veggie cooking water into your blender and blitz till smooth. Add the cooked veggies (with no broth) and blend again. (Save that leftover veggie cooking water to use for soup later--I froze mine in an ice cube tray.)

I have absolutely no idea how this is possible, but this was the cheesiest non-dairy food I've ever had. The color was red-cheddar-ish and the consistency was oh, so creamy.

Try it NOW. Or you'll be orange with envy.

Midnight snack?
Posted by Abigail (aka Mamatouille) at 12:32 PM 1 comment: