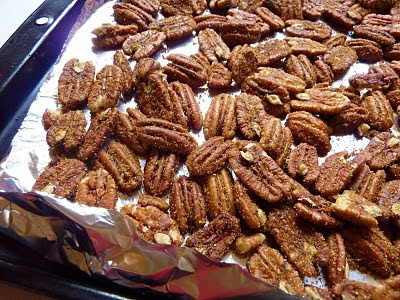 Sounds like the name of an alternative rock band, hey.

Actually, this is what happens when you've got two little boy-beans and one Papatouille who thinks he's Calvin's dad--everything gets renamed. These just happen to be sweet-savoury oven-roasted pecans, inspired by some Sahale Valdosta pecans (with cranberries, black pepper, and orange zest) I bought to put on a spinach strawberry salad. We all loved them so I decided to buy my own bag of pecans and do something about it. 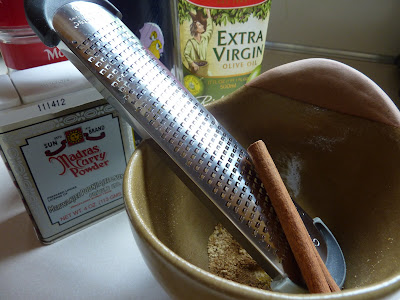 I just made it up as I went along and the little beanies helped as well. They shook in some spices and stirred them up really diligently, knowing the prize awaiting them at the end.

Preheat your oven to 350 F/180 C. Grab a baking sheet and line it with foil, then pour about a teaspoon of olive oil in one hand and use it to coat a handful of pecans in your other hand, rubbing it all together with both hands, and repeating until all your pecans are well slicked and ready for some roasting action. Put them on the pan in a single layer and then grate your cinnamon stick into a separate bowl, adding the other spices and sugar and mixing it all up well. Toss this over your pecans and stir it with your hands, making sure that the pecans are well coated and then lying in a single layer again. Bake for 4 to 4.5 minutes, take it out and stir, then bake for the same amount of time again.

Try to let them cool before popping one after another into your waiting gob!
Posted by Abigail (aka Mamatouille) at 6:40 AM 3 comments:

taking the guest-work out of pbj bread pudding 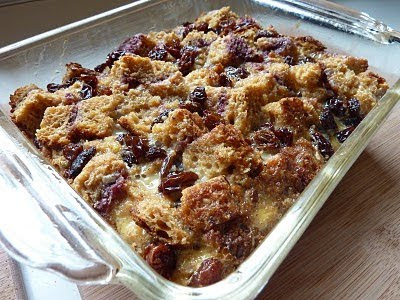 And don't forget to check out the rhubarb crumble ice cream I made a few days ago! Summer is upon us (finally)...
Posted by Abigail (aka Mamatouille) at 5:41 AM 1 comment: 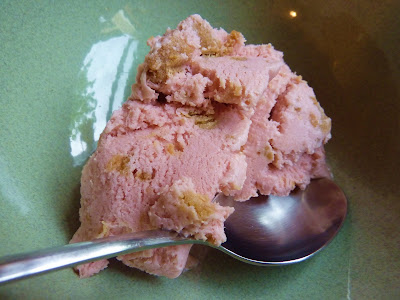 Almost every time we've visited the UK, my mother-in-law makes this Delia Smith recipe and it knocks our socks off with every tart-sweet creamy luscious bite. A hint of ginger in the crumble adds a surprising subtle kick.

We were having friends over for dinner on Monday evening and so I spent quite a chunk of Sunday afternoon making this BUT IT WAS ALL WORTH IT!

You don't even have to have an ice cream maker, thank goodness. (I had some leftover rhubarb so I had the idea to bake it as you would for this recipe but then just use it as a topping on storebought vanilla ice cream or blend it in with a hand mixer.)

I did add some vanilla to the rhubarb part and a pinch of salt to the crumble, but other than that, left well enough alone.

Oh man. This is GOOD STUFF. (I don't usually write in a lot of caps but sometimes you just need to. This ice cream just MAKES me use caps. I can't help it.)
Posted by Abigail (aka Mamatouille) at 1:30 PM 3 comments: