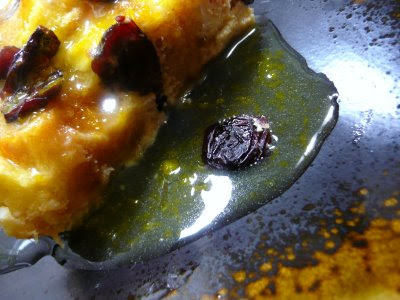 You must, must, must forgo your New Year's resolutions and make this. It's perfect, it really is, if I do say so myself. (My hubby says so, too, and he's not the least bit biased.)

It all just happened spontaneously as I had some frozen yucky sliced white bread from the convenience store leftover from making cornbread dressing at Thanksgiving (the recipe I use for that calls for cornbread hunks and little cubes of white bread as well). I also had two lemons I got on sale for the amazing price of 70 yen (that's a bargain in Japan!). That got the rusty wheels in my little noggin turning. Bread. Lemons. Bread pudding? What would be lovely with that? YES! Cranberries. Mmmmm hmmmmm.

I'd never heard of any bread pudding like this so I just used a regular old recipe (which is not to be sniffed at) from my Better Homes and Gardens Cookbook (it calls for raisins and cinnamon that I left out). I've made a rum sauce to go with bread pudding before (in lieu of the traditional whiskey sauce), but I didn't have any rum or whiskey, and I knew that my homemade plum wine had helped make the homemade cranberry sauce at Christmas really special, so I went for it!

The lemon and egg mixture in the pudding almost came out cheese-like in its creamy sourness, the inebriated plumminess of the umeshu (plum wine) and the sweet-sourness of the dried cranberries all made for a taste-bud-heaven match. 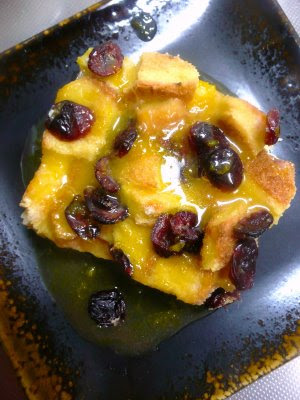 Forgive me, but I just couldn't put my camera down. This stuff was just so darn photogenic, and stayed put, to boot (unlike squirrelly kids who can only be photographed when trapped in a tunnel). 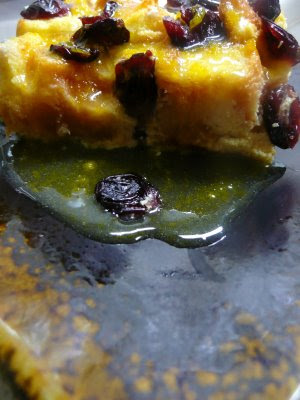 The original recipe didn't say to, but I oiled the glass dish first. 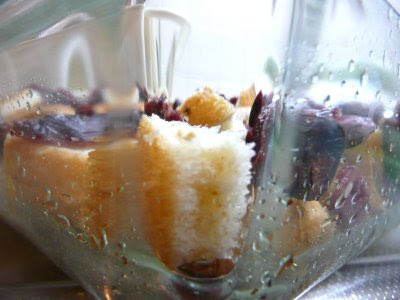 OK, so here's what you've been waiting breathlessly for.

4 slices of cubed bread, either really dried out or toasted
2 lemons (I used the zest of both and the juice of one, but hey, if you're feeling frisky, use the juice of two)
enough dried cranberries to spread over the top (about 1 c.)
4 beaten eggs
2 cups milk (I used full-fat just to make it that much tastier and to really break any vestiges of any resolutions hanging about)
1/2 c. sugar
1/2 t. vanilla

Grease your dish. Heat your oven to 325/165 . In a mixing bowl beat the eggs, lemon juice, lemon zest, vanilla, milk, and sugar. Place your cubed bread in the dish, plop on the cranberries, and pour the liquid mixture over the top. Bake for about 35 to 40 minutes, until a knife inserted in the center comes out clean. (OK, I didn't actually test this and nobody died of salmonella. It was all toasty on top and not too jiggly so I figured that was good enough.) Serve warm with the following plummy sauce.

For the sauce (adapted from the whiskey sauce recipe in Better Homes and Gardens):

Go buy some plum wine at your local Asian shop, or make some yourself and let it sit for approximately two years to get all gorgeous and sloshed. Ready? Good. Grab an egg yolk, beat it up (or if you forget this part like I did it's all good anyway), melt 1/4 c. margarine in a pan and add the egg yolk, 1/4 c. sugar, and 2 T. water. Cook and stir constantly, about 5 or 6 minutes until it boils and the sugar is dissolved. Turn it off and add your 2 T. alcohol.

Spoon it over individual servings of bread pudding, let your hair down, grab a cuppa, and never make any other kind of dessert ever again. This is it, folks.

*The only thing I'd do differently next time is something hubby suggested: Soak those dried cranberries in some warmed plum wine first before you bake it. They'd be nice all juicified.
**Since you don't cook the alcohol in the sauce, obviously don't serve it to your kiddiewinks. Our toddler, The Maffilator, loved the bread pudding as is, no sauce required. He sucked it up like an elephant in a drought at a newly discovered water hole.
***I know lots of other foodie bloggers out there are kicking the holiday-calories goodbye and making lovely dishes like healthy stews and veggies, but you know, I'm breastfeeding and taking care of two kids ages two and under, so don't hate me, but I can eat loads of this kind of puddingy stuff and still lose weight. Brag brag. (Hopefully this won't bite me in the butt when Joel is weaned.)

A whole pan of yumminess. Quick, honey, bring me my fork. 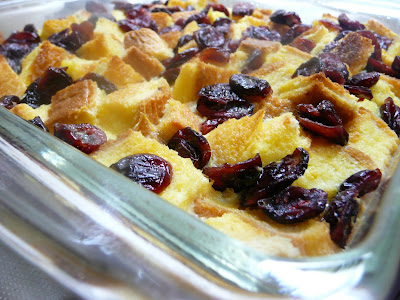 Posted by Abigail (aka Mamatouille) at 9:42 PM

heart bread pudding, I think I may try this :) you are so lucky you are breastfeeding and can eat anything!!

It does look pretty!! So many flavors and different textures!!! YUM!!!!

K and S, let me know how you like it!

Reeni, thanks! It WAS delicious and I'm making it again next week for sure!!!

I bet that would be really good with mochi-milk bread or stale anpan. :)

I love the raku glaze on your plates, too!

This looks like lovin'! Lemon and cranberries and plum wine and eggs, oh my. Lovin'!

Duo Dishes, I was definitely lovin' this and I'm making it again this weekend. I just can't wait to dive in again. Oh yeah. :)

FM, yes it was, and I made it again on Sunday for some friends! I couldn't wait to have it again! :)