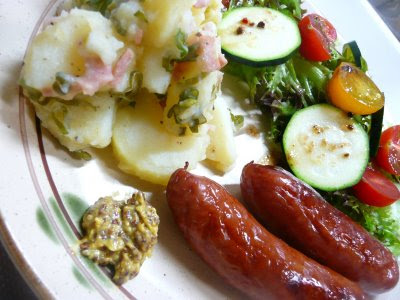 I've been waiting for my foreign-food source, FBC, to get some wheat germ back in stock again, and so last week one of their very nice and helpful employees, Caroline, called me to let me know they had some at last. (Thanks again, FBC!)

Well, anyway, it turns out that Caroline is from Chicago (great city!) and she was telling me about a famous German restaurant there called The Berghoff. Apparently they make really great homemade beer and root beer, and just hearing the word "German" got me thinking about the German potato salad my mom used to buy for me from the deli at Publix when I went shopping with her as a kid. (She also bought me pickles, olives, kiwi fruit, and King's Hawaiian bread, and then I was a little person in eating-heaven!)

So I immediately had to do a search for some German potato salad, and found this recipe that turned out really well - even toddler Joel scarfed some down. (I'm pretty sure I've made a similar recipe before, I just can't remember exactly which recipe or when it was. No comments from the peanut gallery, please.)

The only problem I had with it was the fact that it called for "4 potatoes", which seems really random to me - no weight, no size, no variety, just "4". Anyway, I used 9-10 small Japanese potatoes and it all worked out.

I tried it warm, as the recipe said to do, then room temp, and then cold, and I have to say, I really liked it room temp the best - it seems like the flavors really stood out more that way. Oh, and I also halved the amount of sugar in order to let the vinegary-ness shine through. It did.

Served with grilled sausages (I have a tiny grill "drawer" attached to my stove that worked well for this) and grainy mustard, along with a salad, it was pretty tasty! It's a bit of a PITA to make for a weeknight (because of the time, number of steps, and then amount of dirty dishes it made), but I definitely would make this again for a special occasion!

BTW, if you're wondering what the pink stuff is in the potato salad, it's actually Japanese bacon, which doesn't ever seem to brown, no matter what you do to it. It tastes fine, it just doesn't get crispity-crunchity.

Here's wishing you all the German potato salad success in the world, with crispy brown bacon to boot.
Posted by Abigail (aka Mamatouille) at 3:03 PM

I know what is wrong with their bacon here?? Your memory of King's Hawaiian sweet bread brought back memories of making french toast with them or toasting them and slathering them with butter...mmm. Your german potato salad looks really good. I've never used that "drawer" mainly because I am too lazy to clean it.

K and S - Hawaiian bread made into French toast sounds SO yummy!

I hardly ever use the grilling drawer either, but if I do, I line it with aluminum foil first for easier clean-up.

you are so smart to do that!

I've been thinking of German Potato Salad this week too! Maybe I will make it! BTW, if you go to a meat counter, they sometimes have "kari kari" bacon. This is the kind that crisps up when cooked!

Do you have Yuzawaya down your way? Ours has a new bake area with lots of different flours and wheat germ. Kind of a fun place!

Kim - We always seem to be thinking of the same food at the same time! I wonder how that happens?

I'll try a meat counter sometime, then. I used to go to a big discount grocery store when we lived in Aichi and they had special packs of bacon that crisped up, but I just haven't seen it here.

I've never heard of Yuzawaya but I'll look it up. Just got my box of wheat germ a few minutes ago from FBC! Exciting!