It'd be wonderful to someday write a book with La Fuji Mama entitled Divine Secrets of the Japanophile Sisterhood (we've got so many Japanese food/shops/art-loves in common), but in the meantime, I'm happy to be co-posting today here at Mamatouille and over at La Fuji Mama's place. She just had her second baby three weeks ago and is recovering from that and resting from blogging for a bit. Fuji Mama, o daiji ni, ne (take care and get better soon)! 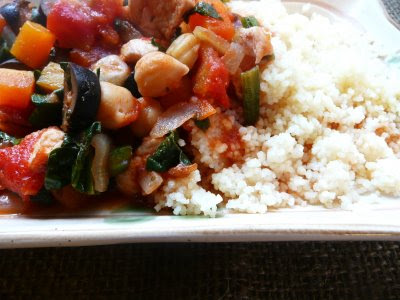 If you haven't guessed by now from the title of my blog, I'm a ratatouille-vore (me and Anton Ego, though I'm sweeter than he is, I promise). I never make it the same way twice, and this time, I decided to just use what I could get. Japanese stores are more seasonal than Western ones, so I'm not able to purchase zucchini (this is rare even in the summer here) and some other traditional ratatouille-like ingredients during this season. Fresh tomatoes are for sale but I try to avoid them if I can - they're pretty sad cases this time of year.

We live in between Kobe and Osaka, on the east side of the main island of Japan, so it's pretty sunny here in the winter, though temperatures can be frigid. The past week's temps have fluctuated between 0 degrees Celsius (32 F) and all the way up to 15 (59 F) or so. So a girl has to be culinarily prepared for any situation the weather people throw at her. This winterized ratatouille was my answer to a particularly chilly day and it hit the spot for all four of us (stay tuned for how I used this to feed even my nine-month-old).

I base my ratatouille-ness on this recipe from All Recipes, though as I usually do, I change it all over the place. Sorry, folks, I can't give you exact measurements for some of the ingredients that follow, but just bear with me and if you decide to delve into it yourself, just trust your instincts and your taste buds as you go. This amply fed the four of us, and I was able to freeze half to use the next week (it matured in the freezer so well that I think I'll make it next time just for the purpose of freezing and eating later!).

For the ratatouille you'll need:

And for the couscous:

Grab a large skillet (ratatouille is usually baked, bit if you've got two in diapers and not much time to cook, the skillet method is great), add some olive oil and heat it up, then toss in your chicken, onion, and garlic. Stir it all around till the pink in the chicken is partway gone, then splash in some lemon juice to tenderize the meat. When the chicken's cooked through, add the tomatoes, parsley, chickpeas, carrots, olives, red wine, marjoram, thyme, and salt and pepper. Simmer for as long as you like to let the flavors meld.

While it's bubbling away, get on with making your couscous, which is so simple, guys. In a separate saucepan, boil the water, olive oil, and chicken bouillon cube (which you've broken up into chicken bouillon dust), then add the couscous, stir for a second, take the pan off the heat, cover it, and let it sit for a few minutes. After your ratatouille has simmered a bit, add the parmesan (I forgot to do that this time so used it as a topping once our servings were on the table). Give it a stir and then add the spinach, waiting just until wilted.

If you've got a little one, just reserve any of the ingredients you want from the ratatouille (I used carrots, tomatoes, and spinach that I actually had in my freezer at the time), puree it, then mix it with some of the couscous. Voila! Baby Beansprout taste-bud heaven.

Though this is a wintertime dish, I'll leave you with a few shots of springy flowers from my neighborhood (with the concrete, electrical wires, and telephone poles cunningly absent): 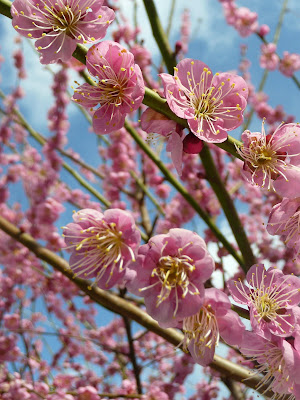 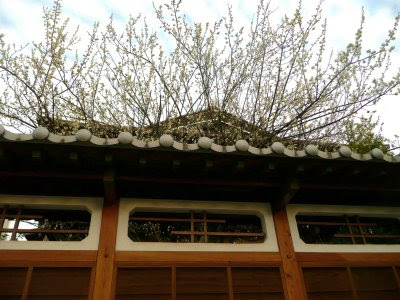 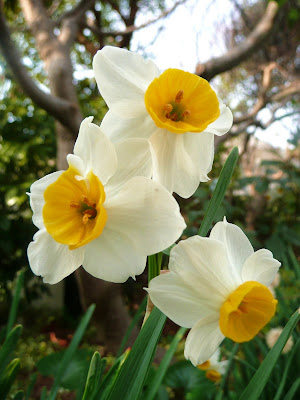 Daffodils (suisen) hanging around in an empty lot

Hugs for everyone from Japan! Mamatouille and the other three -touilles say hi. I hope you're savoring whatever season you're in...wherever you are...
Posted by Abigail (aka Mamatouille) at 11:59 PM

I've never made a ratatouille!! I always thought(assumed) that it only had vegetables in it. It looks delicious and so comforting. It's snowing here in the Hudson Valley-and cold, brr.

Reeni, you're right - it's usually just veggies, but I always take liberties with everything I make! :) Snowing where you are? Make an extra snow angel for me - we don't really get snow around here very much!

K and S, thanks! I wanted to bulk it up a bit! :) It was pretty filling and good for winter.

p.s. I'm making ratatouille for dinner tonight :) thanks for the idea!

I look forward to reading more.

Tamakikat - welcome! Thanks for visiting and come back anytime...

Seems like we're not that far from each other...

What a gorgeous looking ratatouille! Nice pictures too!