carrot-ginger muffins, with a twist (or two) 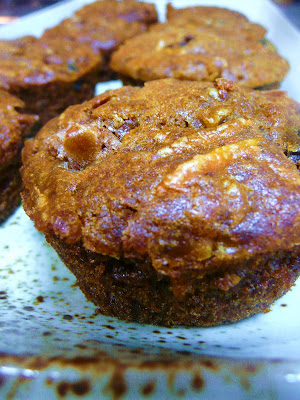 I'm having one of these puppies with a cuppa Rooibos as I write - I just can't keep my paws off 'em. Forgive me if there are some crumbs and/or drool that pop up on your screen.

Man oh man, I've been craving carrot cake something fierce for a while now (and I'm not even pregnant, I promise). I've also been trying to incorporate ginger into our diet more and more, as I've read a bit about its anti-congestion properties. Since all four of us are either fighting colds or allergies around here (the sugi, Japanese cedars, are really bad for hayfever at the moment), I figured a little extra ginger wouldn't hurt and might even help. My little brain-wheels got turning, and I thought, Hey, why not carrot-ginger muffins? Sure enough, when I googled it, there were quite a few recipes along that line. My favorite was this one from cookthink, and what I based my muffins on.

Of course I tweaked 'em a bit:

These babies got raves and a 10/10 from this clan.

Do you like my rice-cooker lid and my drainboard? 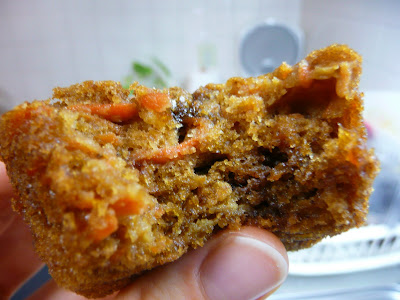 Posted by Abigail (aka Mamatouille) at 2:00 PM

yummy..the whole wheat flour (which I've seen at seijo ishii or tokyu hands) is really takai! I've been adding ground flax seed to my white flour. love your tweaks to the recipe though!!

K and S, it's SO takai! I have bought it at Tokyu Hands and occasionally at FBC from the shop on Rokko, but it's just beyond my budget now. It's outrageous! Where do you buy flax seed?

I've bought it on one of my trips home (Hawaii) and keep it in my freezer.

It is that Bob's Redmill? (is that right?) brand.

Since the weather is still cool, I can send you some if you want. I still have quite a bit in the freezer.

Abigail - if you weren't in Japan, I'd pop over for a cup of tea and one of these delicious muffins. P.S. New blue screen on home page? I couldn't read post on your blog but saw it in my google reader.

Your muffins looks nice and moist and sound delicious.

Nothing wrong with a few changes. It makes the recipe your own. They look quite yummy.

Those look so scrumptious!! I love those cinnamon chips, yummmm!

Ok, now you've got me drooling too! YUM!!

Joan - Thanks for letting me know about that blue screen - it keeps doing that lately since I bought mamatouille.com and I don't know why! Come on over for some tea and muffins anytime! :)

Duodishes - I always change recipes! I just can't help myself! :)

Reeni - You are the queen of cinnamon! :)

Fuji Mama - We can drool together! Come one over and have a muffin! :)

The black sugar sounds interesting. I'm always sneaking in a little extra molasses in recipes that call for brown sugar.

Wow! Those look yummy! I used some cinnamon chips in some banana pancakes this morning! Mmmmmm! Did the "raw" ginger at a hot kick to the muffins, by any chance? Do you read Kayotic Cooking? She just posted a ginger cookie recipe with chocolate and...lots of other yummy things in it.

Kim - banana pancakes sound yummy! I didn't have enough raw ginger to add much of a kick - I was almost out! I'll go check out Kayotic Cooking's cookies - I think I might've seen them already but I can't remember. They sound really nice.

I'm sorry, but it's just not carrot cake without cream cheese frosting. These muffins are far too breakfast-y and healthy. Frosting, I tell ya!

Heather, I think I've partly lost my sweet tooth living over here in Japan - I cut the sugar in desserts at least by half and don't do much sugary topping! You can only buy powdered sugar over here in minuscule packets that cost a fortune, so that's another reason I didn't do cream-cheese frosting, but you're right, it would've been lovely. :)