the true tale of tessa turkey

Hi, my name's Tessa, and I'm in my fourth life already. It all started innocently enough for me--after cracking through my shell, I hobbled out to the very cramped cement barnyard and noticed there were exactly 3.278 million other little poults just like me, blinking under those fluorescent lights and wondering what the heck was going on. The smell was just amazing.

Lickety-split, before you know it, I was a teenager, with even less space to move around now that my body was a bit bigger. My mom had already deserted me and hitched a ride in some seedy guy's truck to run off to who knows where, the flighty thing, and I decided I wouldn't leave the rest of my family like that. Well, turns out I didn't have much choice. I was manhandled and kidnapped (sniff, sniff) and before I could even ask where I could get therapy for that, I ended up floating in plastic in some woman's bathtub in Japan. Yeah, don't ask. She said it was for some kind of project called Defrosting. Whatever. I'm not a good swimmer, lady. 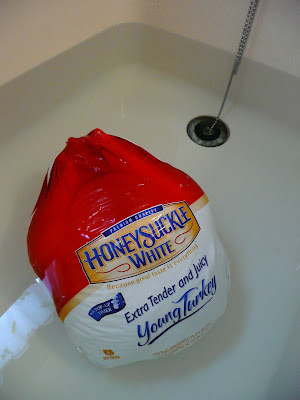 Oh, wait, but I've gotten ahead of myself. First I was really really cold in some kind of big square box in Costco in Amagasaki. In between the kidnapping and that freezing place I don't remember much. In psychology they call that blocking. If you're in my position, blocking is pretty much your only option if you want to stay sane enough to write your autobiography.

That lady who threw me in the water at her apartment was apparently the one who "rescued" me from that icy inferno. (Wait, is an "icy" inferno possible? I really don't know. Everybody tells me turkeys are bred for their meat and not for their brains.) She brought her two little cute noisy kids and that tall handsome British bloke with her, and they had to wait and wait while she got out her measuring tape and sized my friends and me up. She even threw me on a black metal oven tray to see if I fit! Talk about insulting. I wasn't allowed to be any taller than 16 cm (6.3 inches). Well, excuse me. I always thought my figure was just perfect. Evidently she thought so, too, 'cause I got to go home with her. Yippee. (Oh, yeah, and I weighed in at 6.2 kg - about 14 pounds. That's what that nasty stuff they called "food" back in the cement barnyard will do to you.)

Before you could say Turkey, that darned lady set her alarm for some ungodly hour in the morning, took my plastic dress off, and gave me a creepy cavity search. Oh my word. Insult to injury. Obviously she'd never done anything like that before, because she started wailing and got that tall man out of bed to ask him where the giblet bag was. As if he knew. She finally found whatever the heck she was looking for and I heard a big gasp of relief. And they say turkeys have small brains.

So I ended up having another bath in the sink and then an olive-oil massage (that was pretty nice, actually). (Oh, yeah, then that lady started yelling again because she made a last-minute decision to use olive oil instead of butter and then was worried it was all wrong. I felt really moisturized, anyway, and after being in that cold place for so long, my skin needed some help.) I was covered in bacon strips at this point, and some round vegetable thing called an onion was shoved up, ahem, you know where. Then I was very carefully put in a really hot place (called a convection oven) that the lady borrowed (from some other lady named Sarah) because her own oven was too small. I just barely fit in this one. 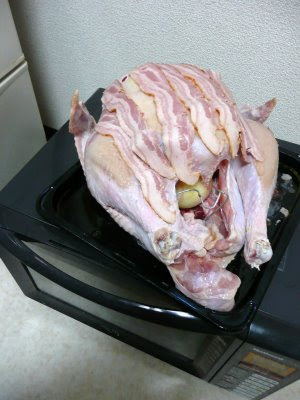 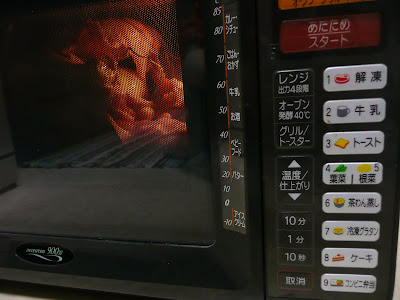 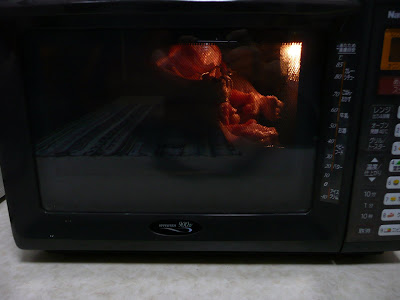 That lady cooked me breast-side down for the first hour (because this website said to) and then flipped me over for the next however gosh-awful long it was in that burning place. She had to use aluminum foil because my top got really done really fast, and when the little red popper thingy popped up, apparently I was done. My legs were still pink, though, so the lady froze them and cooked them in soup later. Much later. Like a week after. 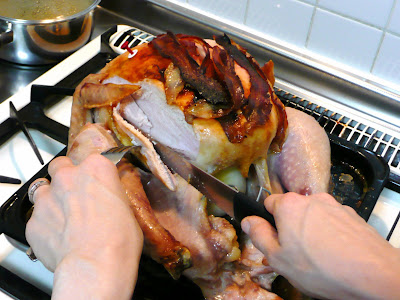 They all said my breast meat was really moist, and I'm glad I could bring some happiness to this world (on December 6, of all days). It turns out I was shipped to Japan, and they don't celebrate Turkey Day there, so these people ate me later than all my friends got devoured back in the good old US of A. 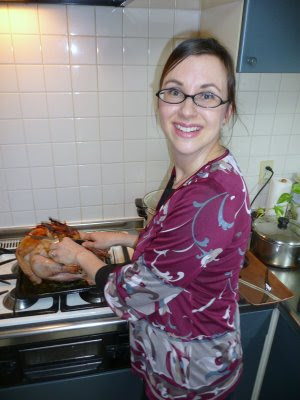 That lady I was telling you about was so busy putting me in that hot box that she didn't even have time to wash her hair, can you believe it! I think for my sake she really should've worn one of those net thingies on her head, you know, to keep me clean. 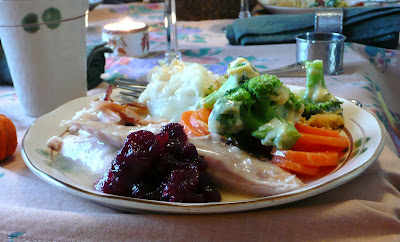 Even though I looked darn gorgeous in the above photo, that was not to be my final incarnation. Remember I told you I couldn't swim? Well, that fact is not helping me considering I'm being tossed back and forth out in the ocean somewhere now.

Maybe I'll end up in Hawaii. I love getting a good suntan.
Posted by Abigail (aka Mamatouille) at 10:27 PM

this was a great post! you are a great writer!

You are so funny! That was cute. My Mom does this to chickens. Covers it in bacon slices. The meat turns out so juicy.

Reeni, I got that idea for bacon slices from my mother-in-law in England, who always does that to turkeys at Christmas. Good idea!

Jenn, thanks but it was my first time ever cooking a turkey, and not under ideal conditions, so maybe next year it will be even better!

Teresa, thanks, your stories are pretty cute, too!