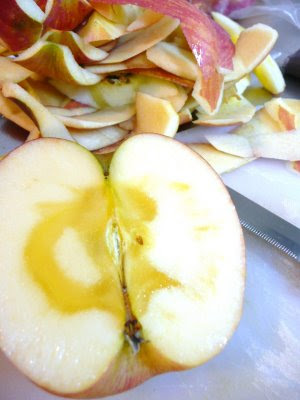 First rule of thumb: You've got two kids two and under, so of course you're not going to measure anything! You don't have the time or the energy to faff around with that kind of minutiae. At least two diapers are waiting to be changed and you're trying to overpower that smelly mess with the beauty of Sun Fuji apples and Vietnamese cinnamon (though I ended up using some regular powdered cinnamon, too, because I was too poopilated to grind the real stuff for very long). 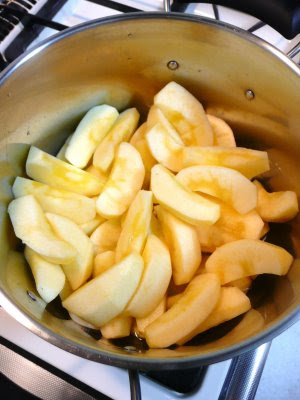 I used six apples, plus some water (I have no idea how much--2 cups maybe? hmmm...), then boiled it all till softish. Sometimes I like my applesauce a bit chunky, in which case I smoosh it with a potato masher, but you know that mama hens have to sacrifice a lot for their chicks. My toddler-chickpea likes sludgy applesauce with no bits, so there you go. In that case, use your hand blender, right in the pot. 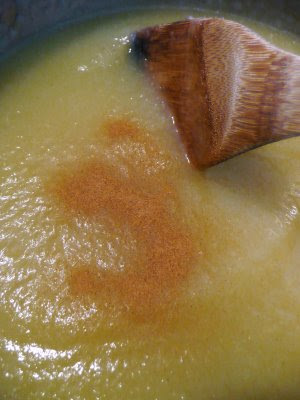 Add some cinnamon, and Bob's your uncle. DON'T, I repeat, DON'T add any sweetener. This stuff is perfect as is. And perfection is hard to come by, so grab it while you can.

Even toddler-chickpeas with coughs and stuffy noses love it: The proof is in the pictures. (And don't forget your Japanese police car, or life loses its luster a bit.) 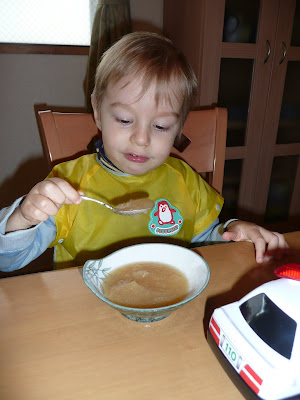 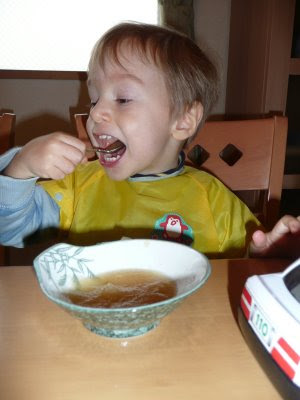 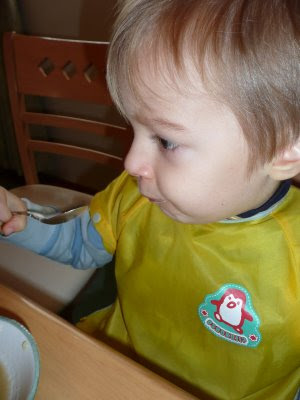 Posted by Abigail (aka Mamatouille) at 4:27 PM

I was making applesauce a few weeks ago - with your recomendations - and used a PEELER to go around and around the apple. Jun was SOOOO proud of me and loves the strings. The next time I grabbed a knife to do my usual. Jun was so disappointed. I told her to remind me next time, and I'd use the peeler. So, the next time I grabbed that knife out of habit and suddenly, Jun was yelling, "NO knife Mama, PEELER!" Needless to say, I'm getting pretty good at using the peeler. What with the cheering section and all!!! Hope your boys are feeling better!!!

Kim, using a peeler is such a good idea--I was rushing so much with the knife that I took off a lot of apple with the peel. That's cute about Jun! I bet Matthew would love watching that, too. Joel is feeling better but Matthew still has snot and a cough, poor bean.

This sounds delicious and I agree no extra sugar is needed.

Ivy, do you make applesauce in Greece? If so, how do you do it?

Mmmmm, now I need to go get some apples 'cuz you've made me crave applesauce!

Don't forget to put your feet up, Fuji Mama!!!

Oh I am so making this to go with our Christmas ham! And I LOVE you for using the phrase Bob's your uncle, my mom ALWAYS says that!

Hey, now there's an idea! I never thought of this going with ham, but that sounds luscious! Over here in Japan we don't see a lot of ham hunks, just little floppy slices with almost no taste. Not a big ham country. I really miss honey-baked ham!

Is your Mom British? My hubby is from the UK and he says it all the time.