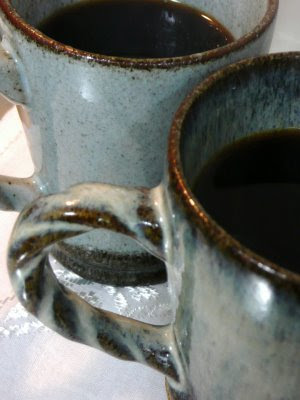 It's only been very recently in Japan that I've been able to find decaf coffee, and since I've either been pregnant or nursing since the summer of 2005 (no joke), this has been a major concern of mine. Yes, if I want to spend about $4 on a cup of freshly brewed decaf at Starbucks, that's an option, but it only comes in one flavor: coffee. No adornments. No special spices. No whipped cream. No syrups. No chocolate-chip-whizbangs. Nada. Just coffee. Which is fine, if I won the lottery and was in the mood for that sort of thing anyway. (I do indulge every few months just for a mama-treat. I cannot tell a lie. But I do have a Starbucks insulated cup and that saves me a whopping 20 yen - approx. 20 cents.)

I've got this recipe for hot ginger coffee (from a magazine I no longer recall) that I've been wanting to make for ages, but I never had the candied ginger. Until now. (Thanks again, Kim!)

Akachan Honpo (a baby store similar to Babies R Us but on a much smaller scale) has started carrying UCC ready-made 97% caffeine-free coffee in plastic bottles, which costs about 298 yen for 900 ml. (If you're in Japan and looking for it, it's in the mama-section, near the nursing bras and ahem, things of that nature.)

The recipe calls for coffee grounds to be added to the filter with the spices, but all I did was use the already-brewed stuff and boiled it with the candied ginger and orange peel in a loose-tea bag, and added the cinnamon in to the pot as well.

It was really gorgeous coffee, and with a splash of our toddler's full-fat milk, even better. The picture on the recipe showed it in a clear mug, topped with whipped cream and slivers of orange peel. Whatever floats your coffee! 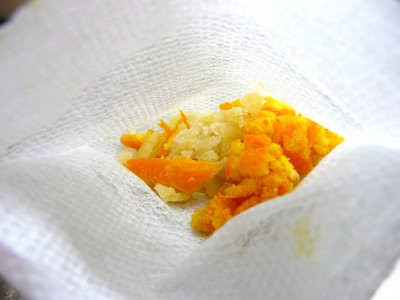 Combine the coffee, orange peel, ginger, and cinnamon and pour into a coffee filter. Add water to your coffeemaker and brew.

Or, if you're like me, use UCC ready-made java and boil it all in a pot on the stove! Worked fine.

OK, not just fine--it's GOOD stuff! (Just watch out for that 3% of caffeine--if you're not used to it, it'll keep you awake a bit and then make you dream of your toddler appearing next to your bed with snot dripping out of his nose, needing a big wipe.)
Posted by Abigail (aka Mamatouille) at 8:46 PM

Have you been to Hiro Coffee? I think there is one near you. They sell beans as well as have a cafe. I think you may be able to buy your own de-caf there and have them grind it for you if you don't have a grinder.

Haven't heard of it, but I'll look it up! Thanks! :) I'm always on the lookout for decaf in any form.

When I worked at Starbucks there was another barista there who swore by making her coffee with a cold process. It decaffeinates it and also reduces the acidity. Can't remember how she did it, but I get you could Google it. :-)

Carrie, thanks! I did see something about that on Lifehacker but then went back recently and couldn't find it. I'll just have to Google it. Good idea!

Since I have some crystalized ginger, and my honey makes coffee, I'll have to try it. Mikan peel sounds like a great idea!

Yeah, mikan worked well. Oranges are like 98 yen each! Gasp!

Next time I'll go to Starbucks I must see if they serve this in Greece. I would like to see how it would taste as it sounds great the way you describe it.

Ivy, I've never seen this ginger coffee at Starbucks, but I bet you could easily make it! A friend of mine who gave me the candied ginger is probably going to post a recipe for it, and when she does, I'll let you know! :)

This sounds perfect for serving around the holidays. I love your pottery mugs as well.

Maggie, thanks, yes, I'm definitely going to make this again soon and it would be perfect for a cozy Christmas.

I originally got 4 of those mugs in a famous pottery town in Japan called Seto, but alas, I'm down to 2 now (sniff sniff).