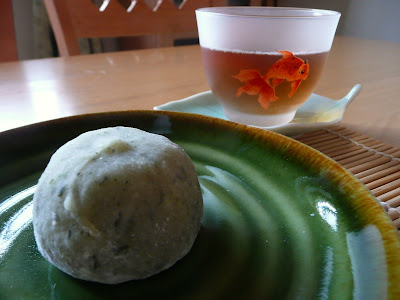 I have to confess something to you: I ate mugwort. Yes, I sure did. No earthly idea what it is, but it sure was tasty. (Hey! Maybe that's what caused the pink elephants I saw that afternoon.)

The mugwort came in the form of yomogi mochi, a Japanese herbed-infused rice-paste ball filled with sweet red bean paste. Apparently the "yomogi" is Japanese mugwort. Well, whatever. It was delish.

And I had a glass of cold barley tea (mugicha) with it - the traditional summer drink here in The Land of the Rising Goldfish. (Oh, oops. That was just on my glass.) The goldfish is another symbol of summer, and I have to squeeze the last drops out of this season before it's gone. I mean, it's already down to a high of 29 C (84 F). Brrrrr.
Posted by Abigail (aka Mamatouille) at 2:50 PM

I have to say, yomogi mochi is one of my favorite kinds of sweets. I am not a real bean paste fan, but the slightly bitter yomogi mochi goes well with the sweet beans. And the green color? It just LOOKS healthy!

BTW, could you ask your husband if people in England eat gobo (burdock root). I had never seen or heard of it before coming here, but heard from a fellow language school student that they ate it in England. Really?