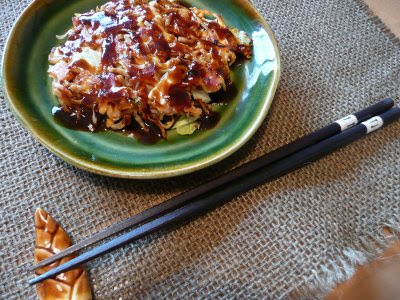 I have a recipe from an American women's magazine (can't remember which one now) from many years ago for "noodle pancakes", which called for cooked ramen, shredded zucchini and carrots, and a dipping sauce made from equal parts soy sauce and lemon juice.

I've never actually made it that way, though, because I've been in Japan since 2001, right after I got hitched to my British blokey, and I started making them the (semi-) Japanese way - these pancake-thingies are called okonomiyaki.

Okonomiyaki is made different ways in different areas of Japan, depending on the local products (various kinds of seafood or pork, etc.).

You know, I still had some of that cabbage left and needed to put more of a dent in it.

I'll give you the magazine recipe and then tell you how I changed it:

1. Break the noodles into four pieces. Cook like the package says and then drain. Keep the seasoning packet handy (though my ramen already had the seasoning built in).
2. Put the cooked noodles in a bowl and add the veggies, eggs, flour, and 1/2 the seasoning packet (if you have one).
3. Heat 1 T. oil in a large nonstick skillet, spoon some of the mixture in and fry like pancakes until brown. (Should make 6 or so.)
4. Mix soy sauce and lemon juice and serve with pancakes.

I've never been taught the "proper" way to make Japanese okonomiyaki, but I've eaten them enough to know I LOVE 'em, and this is what I did to adapt the above recipe for a more eastern taste: Omit the zucchini and use cabbage instead (yea, cabbage!), omit the scallions, I still added the carrot (though a Japanese person wouldn't do that), I chopped some bacon and fried it separately and added it in, and then instead of using that dipping sauce, I used Japanese tonkatsu sauce (very similar to a special topping for okonomiyaki - like a sweet sticky brown sauce).

I served it with sesame'd kabocha and we were good to go!
Posted by Abigail (aka Mamatouille) at 10:00 AM

Hi Abigail! Sounds so yummy! I have never made it with noodles. My hubby loves his ramen, so I will have to try it!

Have you been introduced to Kansai's famous okonomiyaki sauce? It is called Otafuku sauce, and has a picture of a lady on the bottle with huge cheeks - like she has the mumps. We also use Tonkatsu sauce when the Otafuku sauce runs out!

No, I haven't tried Otafuku, but I think I know which package you mean! I think that's the brand of natto that my hubby prefers over all others.

A natto eater in Kansai??? SMILE! I used to tell my friends in Kanto - I'm from Kansai, so I don't eat natto. And they all said, Oh, I see! But, now that it is Jun's favorite dish (thanks to Daddy), I chow down with the rest of the gang.

I heart Okonomiyaki!!! It's been a while since we've had it!! I'll have to look and see if I still have my recipe you gave while we visited!! :)

Hey Teresa! This is actually the same recipe I gave you. Enjoy! :)

Kim, I can eat natto but the smell really drives me away, far, far away from it!

Hi again! I put this blog on my side bar under Food blogs, and thought I had better check to see if you minded. I can take it off if you would rather!

That's totally fine, Kim! :) Thanks for the link!

Just for the record, for others who will try this recipe - the hubby loved it!

Glad your hubby liked it!