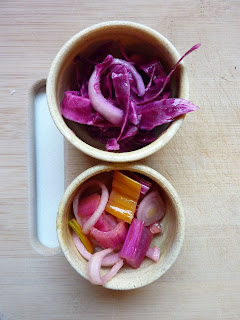 After I made my rainbow chard smoothie the other day, I had the stems left over and I COULD NOT compost them. They were too pretty and I knew they had a kind of crunchy salty flavor. I thought PICKLES! And sure enough, when I searched for chard stem pickles, I found a recipe. And there I was thinking that I was the only one on earth who had imagined that combo. 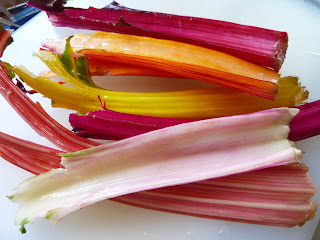 The recipe I found is from Bon Appetit and it's called Sriracha Fridge Pickles. I keep sriracha hot sauce on hand, so with vinegar, sugar, and onions, I was good to go. (Didn't have celery seed so used celery salt.) 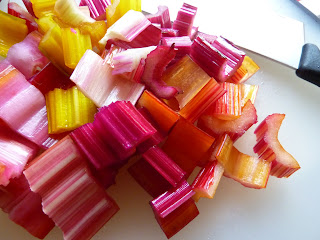 My lovelies. So bright they're almost iridescent. 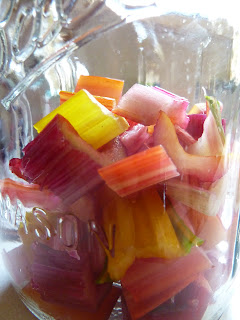 I tripled the pickling brine and used some red cabbage I had on hand for a second batch. 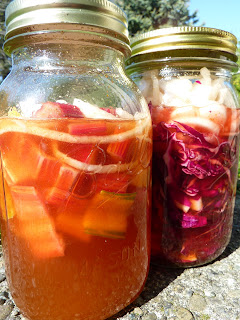 Stir the vinegar and sugar together in a bowl, then throw in the celery salt (or seeds), onion, and sriracha. Pour it over your rainbowy stems and let it hibernate in the fridge for a few days (two was fine).

Oooooh, man. This is good stuff. We ate them a few nights ago with tahini-lemon burgers (recipe to come!) and this made me so, so happy. Looking forward to having them again.

I've always been a pickles girl and just can't get enough--my mom said I used to ask her to buy pickles and olives for me when I was a kid and went to the grocery store with her. So there you have it: I've always been a bit odd. Odd, but with good taste buds.
Posted by Abigail (aka Mamatouille) at 2:01 PM