going to deutschland, having the creamy carrot curry soup 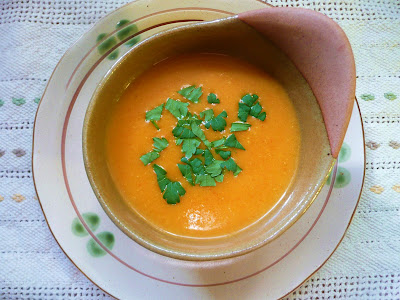 Hey, guys! It's me again. I haven't fully recovered from my overdose of cranberry-lemon bread pudding, so I thought I'd make it again tomorrow since we've got some friendies coming over for an early supper. Maybe a little bit more of it will help me get it out of my system - that's my theory, anyway, and I think it's a darn good one. And of course I want to share the pudding wealth.

In the meantime, I realized I've got two events coming up that I wanted to join, and the soup I made for lunch today will work for both. Yippee! It's definitely yummers enough for double dipping, so don't diss it just because it shows up at two parties in the same dress.

Joan over at FOODalogue is still on her round-the-globe cyber-culinary-journey (helping BloggerAid along the way) and I'm joining her in Germany to have some of this luscious curry-fied soup. It's got a kick, but not so big that your toddler doesn't guzzle it down his gullet. I hung out with Joan in Norway with my lemon loaf and am also planning on joining her in the Deep South, if not before.

And here's the recipe for the soup from one of my absolute favorite cookbooks, Extending the Table: A World Community Cookbook. In German it's called Mohrrubensuppe, but I don't speak that particular language so it's just "carrot soup" for moi.

Melt the margarine in a large pot, then add and saute the carrots. Sprinkle the sugar over, then add the flour, curry powder, and broth. Bring it all to a boil while stirring and cook until the carrots are tender. Turn off the heat and purify in your regular blender (how I used to have to do it) or with an immersion blender (much easier and quicker and less washing up afterward). Add salt to taste, the sour cream or yogurt, and the wine. Serve immediately. I added some snipped parsley to mine today and it added just the right flavor.

I usually triple or quadruple this and then freeze some, and it works beautifully. Plenty to chow on the first day, a bit of leftover the next, and then the fruits of your labor pay off later when you're craving it again but don't actually feel like peeling and chopping and boiling.

(BTW, if you can tell me what kind of bowl that is in the above photo I'll blow you a kiss from Japan! It's a traditional Japanese bowl for eating...what? I'll give you a hint. It's not for soup.) 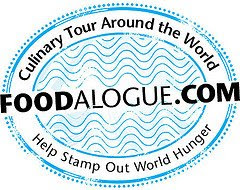 Posted by Abigail (aka Mamatouille) at 12:22 PM

sounds delicious! you are such a jet setter too :)

Looks so nice and creamy...and it's such a pretty color.

Joan, thanks, yes, you have to try it in Germany! It's VERY creamy!

What a beautiful and satisfying soup! The descriptive words in the recipe is to die for!

I don't know specifically what that traditionally used for. I've seen it in Japanese restaurants, but they put soy sauce in it. Although, I think the bowls are smaller, not even big enough to put a serving of soup in them.

I wanna know!! and oh, blow me kisses please! :D

WORC, I'll let you know what the bowl is for, but I'm going to wait a bit to see if other people have guesses first. It's not for soy sauce!

Your soup looks delicious, so cream and spicy!! I am guessing either a noodle bowl or some kind of ceremonial tea bowl? Am I allowed two guesses?

Reeni, sorry, it's neither, but good guesses! I'll let you know soon! :)

I love your soup--so bright and pretty and curry and carrots are such a great combo. Thanks for coming to Souper Sunday--the round up is posted.

P.S. I know I have seen that type of container before but u have no idea what it is for. Can't wait to hear about it.

Deb, glad to be part of Souper Sunday! I'll let you know soon about that bowl...

Abigail this is such a nice recipe. You don't often see carrot soup so this is a nice change from all that squash soup I ate in the Fall. This Germany meet up was fun and I hope to do more with Joan. Your blog is very nice, I love the style!

Robin Sue, thanks! I like yours, too, and I loved that yellow snow! :)

Looks really nice and authentic (I'm German, so I know ;-)). What is that bowl for? You didn't say that in the comments...

ap269, thanks for visiting Mamatouille and for asking about the bowl. It's actually a traditional Japanese bowl for eating natto, fermented soybeans that are very stringy! My husband loves them, and I don't mind the taste, but the smell really puts me off. By the way, I'd love to know how you found Mamatouille. Do you mind my asking?