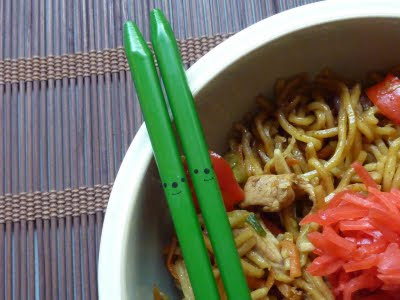 Yakisoba is not an okazu, not something you plop on rice, but with fried pork, veggies, and noodles, there's not a lot to complain about, eh!

And just like the gyudon, you add a wee bit of beni shoga (pink pickled ginger strips) and the taste just noodles its way into Japanese foodie nirvana. Reminds me so much of summer festivals (natsu matsuri) and the yakisoba food stalls. Taste of summer - yum.

Now all we need are the big ol' amazing Japanese fireworks! 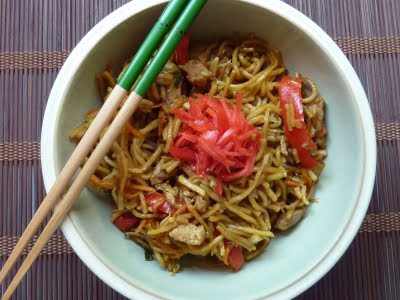 Just grab a pack of yakisoba noodles from Costco (or your favorite Asian market), and in veggie oil, pan fry some thinly sliced pork (or chicken), onions, carrots, cabbage, and whatever other veggies you like (I also threw in some red pepper, green onions, garlic, and ginger). The Japanese packets of yakisoba that you buy in the grocery stores there come with a seasoning pack, but the kind I buy here in Seattle at Costco just have the noodles, so I also pour in some okonomiyaki sauce, which I tend to keep on hand. Add the noodles last and stir with your long cooking chopsticks till well combined. It's pretty yummy to let it all sit over high heat for a minute or two (after combining) so it gets a kind of deeply flavored darker crust.

Fireworks in a bowl!
Posted by Abigail (aka Mamatouille) at 2:04 PM

I need to send my best friend the link to your blog. She loves Japan and has visited once, but would love to go again. She loves all the great recipes. I need to learn. When it comes to choices about what I cook, I am SO weak when it comes to Asian food. Did you get the link for the old recipe for baked ricotta you asked about? :)