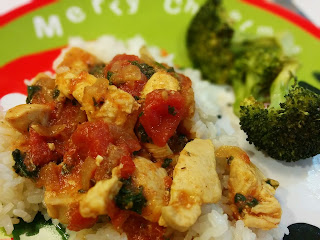 Not exactly Moroccan, but as close as Ameri-Brits in Japan could get.

This was a kitchen-collaboration with my younger Bean, and we had fun putting it together. A Mamatouille-J-Bean original. Enjoy!

Saute your onions in olive oil until brown, then add the garlic and stir for a bit. When the garlic is a bit browned, pour in about 1/4 cup of cooking alcohol and let it steam off. Throw in a little more oil and then brown the chicken in the pan with the onions and garlic. It doesn't have to cook through at this point, just enough to get a little color. Now toss in the tomatoes, parsley, Moroccan spice, salt, pepper, coriander, cinnamon, and dried citrus peel. Simmer for as long as you have time (and make sure the chicken isn't pink in the middle--this doesn't actually take long).

At the very end, just before serving, add the lemon juice and stir through before spooning it all on rice with a side of roasted broccoli. We had pineapple for dessert, and the elder Bean had his in a yellow bowl. He said the pineapple was camouflaged.
Posted by Abigail (aka Mamatouille) at 8:23 PM