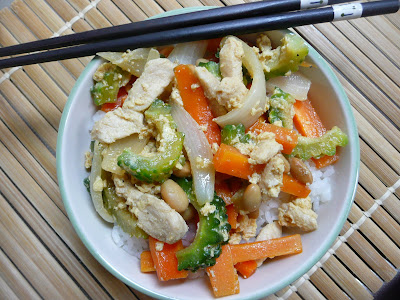 Goya (bitter melon) is such a cool veggie - I could eat it all the time and never get tired of it (it's bitter, though, as the English name for it implies, so if you're not into bitter tastes, it might not be for you). It's grown in Okinawa and a bit in other parts of Japan, and I received one as a gift from my friend Nobue and her garden recently. I asked her how she likes to eat it best and her answer was chanpuru, a dish that used to only be eaten in Okinawa but is now common elsewhere in Japan as well.

Nobue's directions: Cut the goya in half lengthwise, scrape out the white part and the seeds, slice it, and then soak it in salt water for a while to help take away some of the bitterness. Saute it with oil, pork, and vegetables such as carrots, bean sprouts (moyashi), and garlic chives (nira). Beat some egg and add to the pan with some chopped drained hard tofu. For flavor, add salt, pepper, and soy sauce at the end. Serve over rice and enjoy!

Well, I didn't have everything on hand, so I took some liberties, substituting and adding as I went, and this is how I ended up doing it: I sauteed some chopped chicken and minced garlic in oil, then added some cooking sake, sliced onions, and carrots. Next came the goya and some cooked soybeans (in lieu of the tofu I didn't have). I used mostly egg whites (leftover from making lemon-lovers' pie) instead of whole eggs, and instead of the salt and pepper, I used seasoned salt along with the soy sauce. 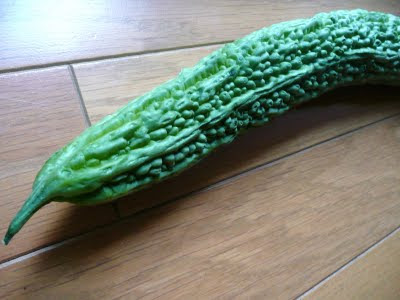 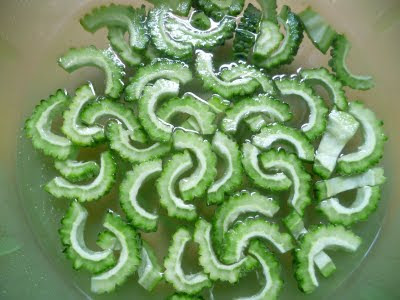 It's a nice mixture of different flavors (sweet carrots, bitter goya) and textures (soft chicken, crunchy veggies). Can you find or grow goya where you live?

Oh, guys, make sure you stay tuned for a goya juice recipe that my hubby's boss makes for all the employees! Coming soon to a Mamatouille near you...
Posted by Abigail (aka Mamatouille) at 1:30 PM

wow. how intriguing. i've never tasted bitter melon, and you make it sound so good, abigail. surely they have this somewhere in new york city. would it be in season here?

Cate, I bet you could find them in NYC, maybe at an Asian market. Apparently they're grown all around South Asia - they've been in season here for the last month or so.

I made a Chinese goya recipe tonight. I'll probably put a link on it. But, I have to say...goya will not be purchased to be eaten in our home. We receive it - we eat it. And that is my conclusion!