the cabbage challenge and cabbage meal #1: fancy coleslaw with chicken and mint

You probably won't believe why I bought this head of cabbage, and maybe it's TMI for some people, but what the hey, I'm just gonna tell you anyway. I was having a wee bit of trouble breastfeeding (my son is teething and not nursing on his old schedule, so I got kinda clogged up), and I heard from an American nurse and a Japanese breastfeeding consultant that cabbage leaves can be good for that kind of thing. I was pretty skeptical but tried it anyway, so I was walking around our apartment with cabbage leaves in my bra! No lie, people.

OK, so now you know. Don't run away just yet, though, because I used the leftover (non-bra-stuffing) leaves for some different recipes. That was my own challenge: How many meals can you make from one head of cabbage?

A lot, if you use one of these huge suckers. 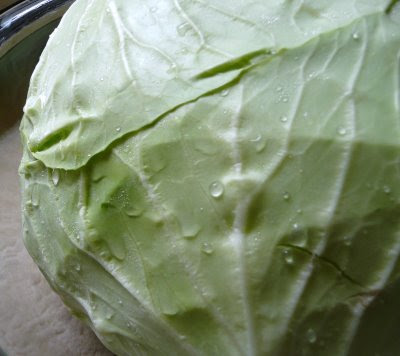 I have big hands, but that thing couldn't be held down! (It must've been one of those tough WWF cabbages that are on the circuit lately.) 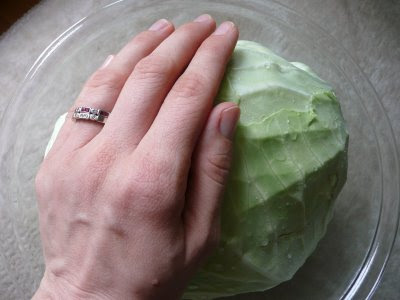 A friend of mine had taped a Nigella Lawson show from Japanese TV about six or seven years ago (and I probably borrowed and watched it about five years ago), and one of the dishes Nigella made was her own version of coleslaw, without any mayo (yea!). I've wanted to make it for ages but have had all kinds of other things that have crowded it out of my mind, but when I had all this cabbage sitting around, acting big and bad, I knew I had to do something with it before it got out of control. 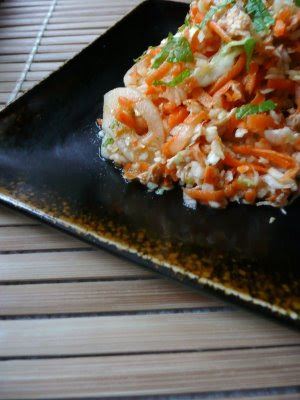 Mix all of the above together and let it sit for half an hour.

For the salad, thinly slice a cold cooked chicken breast, grate some carrots and cabbage, and chop a handful of mint.

Toss all of the above together and add more mint on top.

OK, now cross out almost all of the above ingredients and start over, 'cause I didn't have much of what she called for and that's what I did. Substitutions, baby. I didn't have fish sauce, so I used soy sauce. No rice vinegar in the house, so apple cider vinegar had to work. I don't buy chili, so a shake of cayenne pepper took its heated place. And I've almost never seen lime juice for sale in Japan so I substituted lemon instead.

I didn't slice the chicken breast, I shredded it with a fork instead. I did use cabbage, carrots, and mint, and somehow, even with all my changes, it fused and worked. Even better the next day after it's all been partying in the fridge together, but beware, the mint turns a brown color, so I wouldn't serve it to guests unless it's just been made.

My toddler son even ate a bit of it, and that's a true miracle. This must be really good stuff.
Posted by Abigail (aka Mamatouille) at 8:31 PM

Abs, I was told that cabbage leave dry you up. So when you're weaning J you can do the same thing and they should dry up your milk. Be careful w/ that in the mean time!! :)