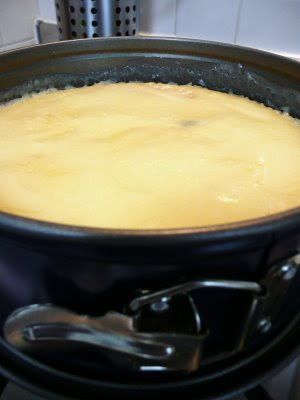 My poor mom got braces on her teeth when she was in her thirties and because she couldn't eat much solid food after they were tightened at each appointment (man, I know that pain!), the good folks at Andrea Quality Cheesecake down the road from our house got to know her by name. We kids were graciously allowed to tag along on each jaunt and to pick out our own favorite baby cheesecake (mine was usually pineapple or turtle). (Mom, I bet you went on some secret missions by yourself, too! Just a wild guess on my part. That stuff was too good to stay away from for very long.)

And thus was born my insane love of everything cheesecakey.

I normally go bananas for pumpkin cheesecake (recipe to come soon!), but just recently I started dreaming of a beautiful marriage. (Yes, I'm in a great one but read on! Don't gasp and stop here!) If you were to ask me what ice cream flavor I would normally choose, I'd have to say that I pick rum raisin on a pretty regular basis (when I do indulge). Well, I got to thinkin' (always a dangerous thing). If rum raisin ice cream is yummylicious, and cheesecake is my FAVE, why not arrange a clandestine meeting for the two in my kitchen and see what would happen?

I'd say blind dates are probably a 50/50 proposition, they really could go either way, but I'm happy to announce...ta da!...as I popped open my trusty springform pan and unveiled the lusciousness within... 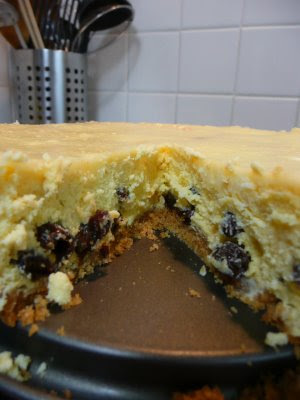 It's a match made in heaven!

Mmmm, each bite a coupling of sweet juicified plumped-up raisins and smooth-sharp booze. You just can't go wrong with this love-child. (Definitely meant to be.) 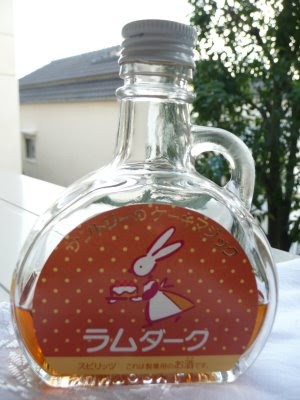 I got the secret to a happy marriage from Flora's Recipe Hideout, with her Rum Raisin Cheesecake #2. I don't know why #1 didn't work out, but we won't ask any probing questions, will we.

Stuff I did differently this time: I've got a smallish 8-inch (20-cm) springform pan, and the thought of spending two arms and two legs to buy two pounds of cream cheese in Japan did not fill my wallet with glee, so I halved the recipe. It worked fine! (Come closer. Closer. A leetle too close! Watch it! There, that's better. Now I'll let you in on a little secret: I didn't halve the amount of rum. Or vanilla. And actually, even if you don't believe me, it was by mistake, but neither of us is complaining.) The recipe called for 1/2 c. graham cracker crumbs, but I found it wasn't enough, so I ended up using about 1 cup, and I used coconut sable cookies and pulsed them to smithereens in my food processor. I didn't add any sugar to the crust because hey, cookies are loaded with the stuff anyway. It said to soak the raisins in water to plump them, but I went one step further and nuked them for a minute or so in the water as well. Made for extra fluffy, huggable, squeezable withered grapes. Oh, and for the sour cream topping, I did NOT add the rum it called for (because of aformentioned sloshed-cheesecake mistake), just in case you were worried about me. Oh, yeah, I baked the crust for 5 minutes before adding the cheesecake batter, and I also baked the topping for another 5 minutes after I spread it on. That's what I do with the sour cream topping on my usual pumpkin cheesecake and it works well. Try it. See what you think.

Stuff I'll do differently next time: One of my favorite treats is rum-chocolate-covered raisins from the co-op, and I meant to add some chopped bits of dark chocolate to the cheesecake this time around, in homage to the co-op, but I completely forgot. Next time, I promise. My preciouses.

Note: Let this baby rest in the fridge overnight and you won't be disappointed. But if you happen to sneak a bite or two before then, it wouldn't be so terrible either.

Do you love plain traditional cheesecake, or do you go for a certain love-child match? What's your fave?

Posted by Abigail (aka Mamatouille) at 2:52 PM

Any cheesecake will do. It's one of my favourite desserts.

That sounds delicious! I just had rum raisin ice cream recently and forgot how much I love it! This cheesecake looks awesome!

This cheesecake sounds really good... rum and raisins are perfect combination! My grandmother used to make something similar, only without the rum :(

Ivy - mine too! I LOVE cheesecake with a vengeance!

Jenn - I think it's better than the ice cream!

Margot - I would love to have your grandmother's recipe! Do you have it and want to share?