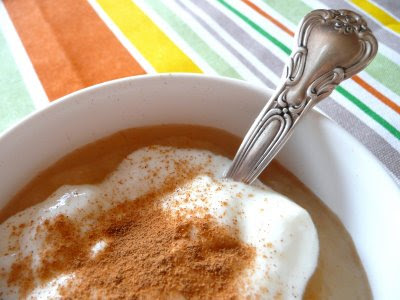 This one's for a fussy toddler--a sugar-free applesauce base with a dollop of plain yogurt and a sprinkle of cinnamon. I sometimes make homemade applesauce because you can't buy it in Japan, but this time I happened to have some from an import store. (I personally like my own homemade version much better! Kudos to moi.)

Right now, though, The Bean is munching on some shrimp senbei (rice crackers) that a new neighbor brought over as a moving-in gift. I've gotten used to this Japanese custom (which is the opposite of how it is in the U.S.--in Florida (theoretically) the established neighbors take gifts to the newbies), but sometimes the presents are a bit more prosaic than food (like laundry detergent). We never say no to free stuff, though, even if it's not edible.
Posted by Abigail (aka Mamatouille) at 3:56 PM

I HEAR you! Bring on those towels and freebies!

I make applesauce too! I would love to see your recipe!

I just use a recipe from Better Homes and Gardens - just peel and slice 3 lbs. apples (I use about 4 or 5 Japanese apples), add 1 cup water, 1/4 t. cinnamon (and sugar if you want, but I don't add it), and boil till tender, then mash.

Hmmm. I have been trying to copy my Grandma's recipe - without ever seeing her recipe nor seeing her make it. HA! I haven't been putting water in the apples, just boiling them on really really low fire. It is good, but seems different from Grandma's. I'll try adding the water!

I must try this. It sounds so good.